It all starts with people, right?

Wrong… or at least I believe that to be wrong.  When I was the strength coach at Iowa State University, we had a debate/discussion/disagreement on in-season strength training.  Actually, the disagreement was with just one person, our defensive coordinator, who eventually went on to be a great success in the NFL while I went on to start and run a success business in sales training, coaching and consulting.

The reason for the discussion was to eliminate variability of performance mid to late season. At the time, I didn’t recognize it as eliminating variability of performance. I just suggested to our football staff that, if we wanted to eliminate or minimize injuries to our players, we needed to keep their strength and endurance at a high level.  Other consistently high-level performing teams, like Nebraska and Penn State, had very aggressive in-season conditioning programs.  I respected the conditioning coaching at both of those programs and the records of the teams spoke for themselves.

The argument started and ended with this:

The variability of performance didn’t just apply to a single individual, but the performance of the team was impacted by the inability of one person to perform or perform well because of injury or endurance.  What an organization needs is a system and process in place to minimize lapses or lack of performance by individuals.

I believe it all starts with systems and processes in place to support the function and execution of the people expected to perform.  The organization needs to be strong and have endurance to support the skills of those going to the right place at the right time.

Take a look at the following findings from a Sales Effectiveness and Impact Analysis that we conducted for a sales team: 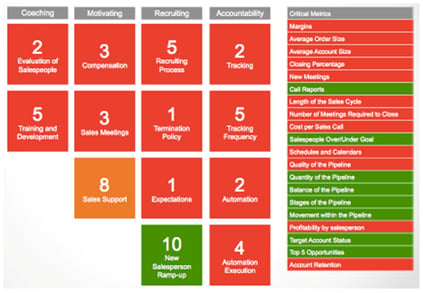 Management is asked to identify, answer questions about the systems and processes in their organization that support the implementation and execution of effective selling by their sales team. The numbers and colors you see are reflective of how they answered the questions.  There are no “leap in logic” questions and findings here.  Just straight up math based on an individual evaluation by the manager.  If they said “yes” to five questions in accountability/tracking, they got a five.  In this example, the number is 2.

Forget about what the colors and numbers actually represent in terms of implementation or execution - just look at the variability of numbers in the red boxes.  This alone is a major contributor to the variability of performance expected of those to execute sales systems and processes that are designed to help them be more productive.  Looking at “accountability” alone should give you pause to think about your own organization:

If variability of performance is an issue - and it always is (see below) - then assess your systems and processes as you assess the variability of the individuals that make up your sales management and sales team.  That post is coming NEXT!